The political climate is having a direct impact on the Foundation’s work. While North Macedonia’s strategy of moving towards a united society is in keeping with our project interventions, opaque processes in Serbia and the change of government in Moldova are creating uncertainty.

Even though high poverty levels, unemployment and migration still represent the most significant socio-economic problems in North Macedonia, the government is moving in the right direction with its concept of creating a united society. “The strategy chimes with the interventions of the Children’s Village where inter-ethnic relations and intercultural education are concerned,” said Azbija Memedova. The country representative is particularly pleased that the changes suggested by the Foundation in 2019 were included in the recently adopted Primary School Act. The Act protects the participation rights of children in decision making and contains measures that ensure access to education for children older than the school starting age but who do not yet attend school.

In Serbia, joining the EU is still a matter of high priority, but the requisite legal agreement with Kosovo has yet to be resolved. A new strategy is being developed in the education sector. “The development process is far from transparent, which means we do not know what the principal direction of the education system will be,” said Country Representative Slavica Kijevcanin.

The political situation in Moldova remains unstable. The new elections resulted in new appointments to all of the Ministries. This change and the associated loss of expertise throws the implementation of previously approved education programmes into doubt. Work-related migration results in a huge number of children who are left behind. The Migration Policy Institute talks of some 100 000 social orphans. The Pestalozzi Children’s Foundation is addressing this problem with its new “Educational, Social & Psychological Integration of Social Orphans” project. 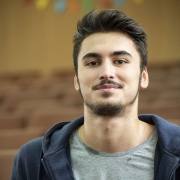 «It is inspiring to meet people from every corner of the country who recognise what is going wrong and point out how it can be changed.»

Intercultural education has been incorporated into the national curriculum and is being taught outside of the project schools as a subject called Education for Society.

Our projects reached 10 739 children and youths.

The cost for recognition of foreign certificates has been reduced for welfare recipients by 82. This makes it easier for them to send their children to school.

5504 teachers consolidate their knowledge in the fields of child rights and intercultural teaching.

In total, 1369 teachers improved the quality of their teaching through advanced training courses.

Other articles by Christian Possa